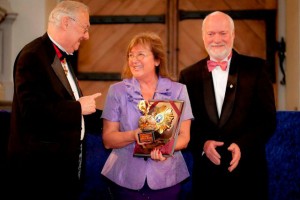 The representatives of the Slobomir P University on the 21st June, 2011 were given the “European Prize for Quality” in Oxford. The Appellation Board of the “Europe Business Assembly” (EBA, Oxford, Great Britain) suggested at that time the rector, PhD Desanka Trakilovic, for the member of the “Europe Rector Club” (so called CRE).

Mrs Mira Pavlovic, as one of the founders of the Slobomir P University, on Tuesday on the 21st June, 2011 attended the “European Award ceremony” which took place within the “Oxford Summit of Leaders” and then received the “European Prize for Quality” which is given to our University.

The prestigious prize the “European Prize for Quality” is given to the companies, academic educative institutions, products and services which satisfy the highest standards of quality and concurrency, and it is given by the “Europe Business Assembly” – EBA, Oxford, Great Britain. EBA is an independent organization for the development and management of the economic, social and humanitarian cooperation, which as a non-governmental organization promotes the establishing of the economic, cultural and scientific connections, and at the same time creating the international business and science elite. This Assembly makes a decision who will be suggested for the “European Prize of Quality”.

The nomination for the “European Prize of Quality” and the suggestion for the membership to the “Europe Rector Club” are determined according to the detailed research of the analytic sector of the “EuropeBusiness Assembly” made of:

–          International Education Center of the University in Vienna (Austria)

–          The Association of the Consultants – Marketer (The Czech Republic)

–          The Association of the Marketing Counselors

–          The International Congress of the Industrialists and Entrepreneurs 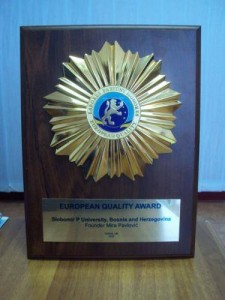 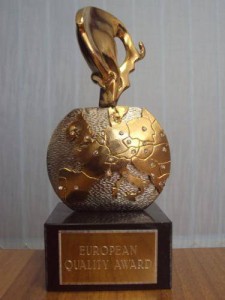 During this and previous years the marketing sector of the mentioned Assembly conducted the research of the professional activities of the Slobomir P University. Then, they used the public information sources, taking into consideration the education system, the use of the international education programs and other aspects. The research showed that the Slobomir P University is at one of the leading positions in the education area, that it completely fulfills the requirements of the modern study conditions, and that it considerably pay attention to its reputation, which at the same time proves the expertise of the education staff, high quality of the research, introduction of the international programs and their realization.

This is, for our University, a very significant affirmation of the success of all the effort during the years that our professors, assistants and administration put to meet all the requirements of the contemporary education. In the following years we will do our best to be better and to justify the given prize.